The launch of the first Mac & Cheese dining experience in the heart of Sheffield.

Food-entrepreneurs and sisters Emily and Hatty had run the successful mobile-food chain Fizz & Fromage (which we also had the delight with working alongside) since launching in 2018. They reaped great success at food festivals across the UK with their Mac & cheese dishes and a glass of Prosecco to wash it down.

With new twists on Mac & Cheese dishes, the opportunity to drive their successes into a permanent location was looking more suitable. After all, no one in their hometown did this type of dining experience.

They were seeking a new brand that was engaging with the city-goer who wanted something different on the menu to most other restaurants and that could be eaten in or on the go.

The brand requirements were to be bold, fun and have a twist to the normal expectations, which were integral factors in forming our name creation of ‘Macpot’ - being different from the rest and not being afraid to shout about it. It was a perfect match all round.

Our brand identity design was led by a custom logo mark which implemented the values of their brand and that would sit perfectly in application against other components. The macaroni badge resembles the emotion of the customer after they’d indulged in the tasty Mac & Cheese delights.

We produced a simple colour palette that was versatile in different combinations, allowing us to bring the right detail forward in application. The type styling related to the bold and fun appearance with a rounded edge that complimented the wording being used for brand awareness. 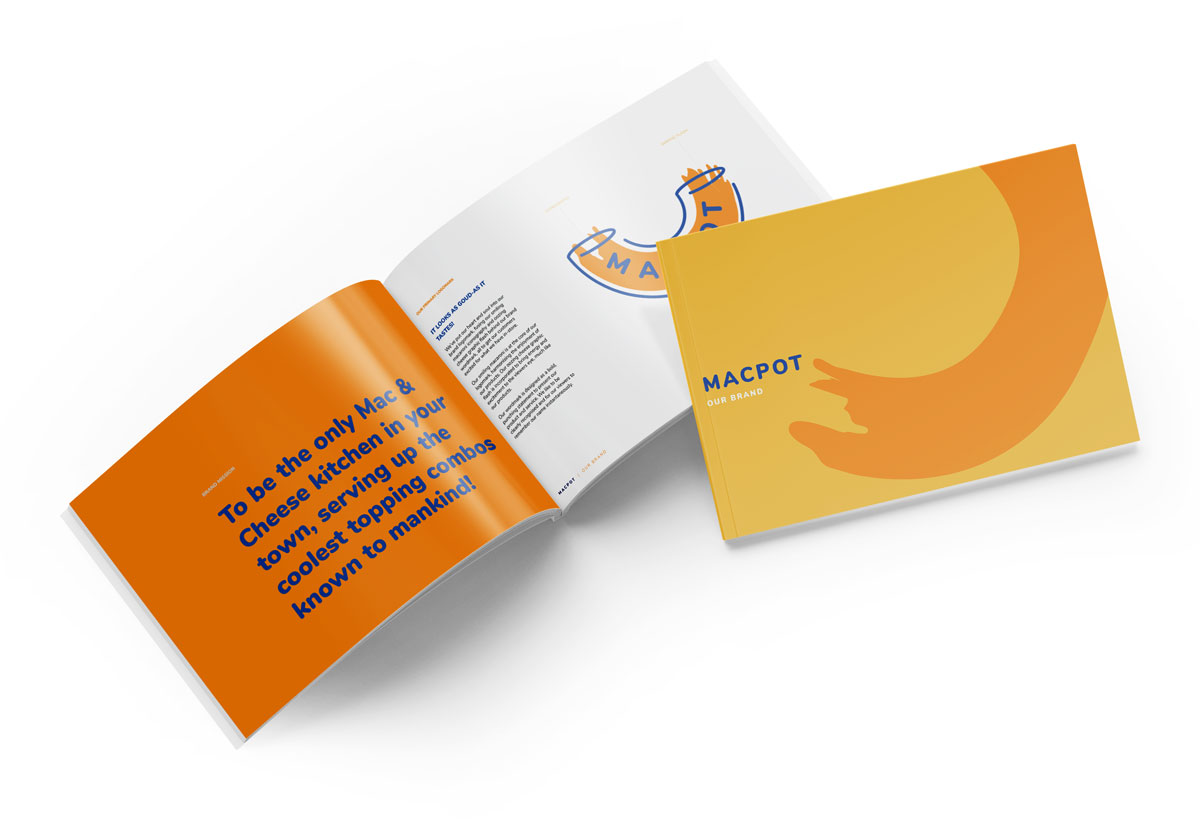 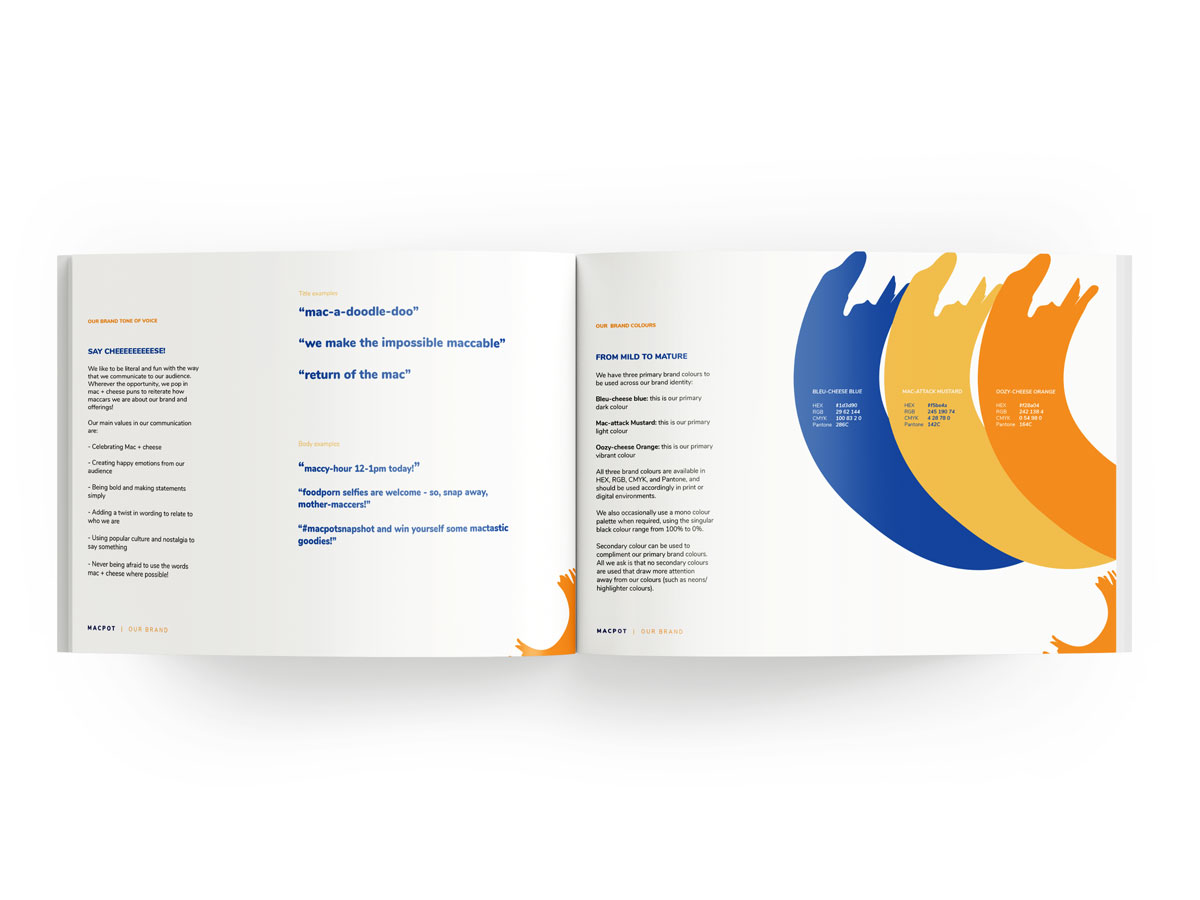 To showcase the food creations that Macpot would be serving and fit within their brand values, we wanted to set the bar high for elevating their brand awareness above their competition. We pitched the idea of creating a series of food stills that showed their Mac & Cheese combinations jumping off the page. Literally.

The brand identity became more established once we produced the photography series for Macpot. The concept of their menu and brand were fully incorporated within these images, and married up perfectly to the identity design that we had produced.

We brought the brand identity and content into the different marketing designs required and we saw how effective the overall brand awareness was starting to take shape. 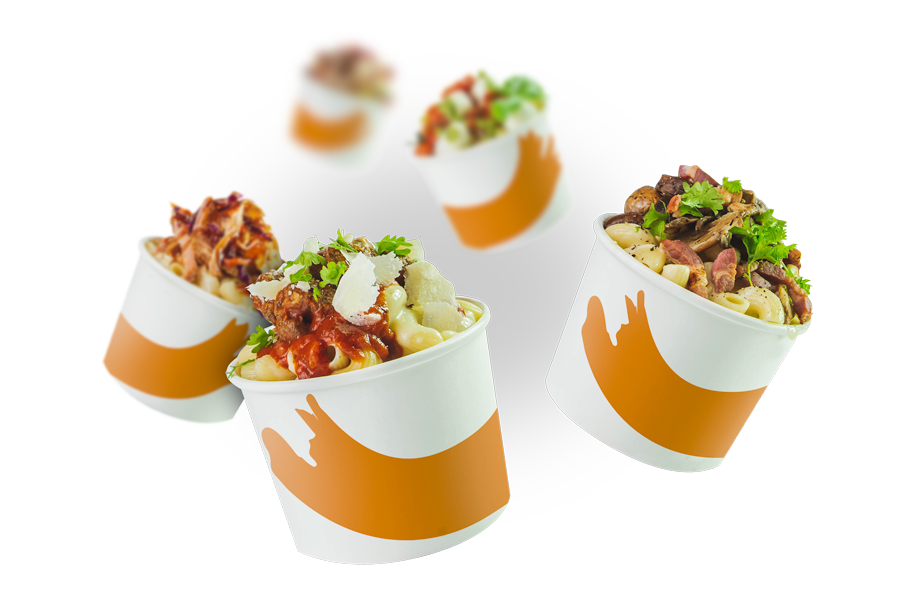 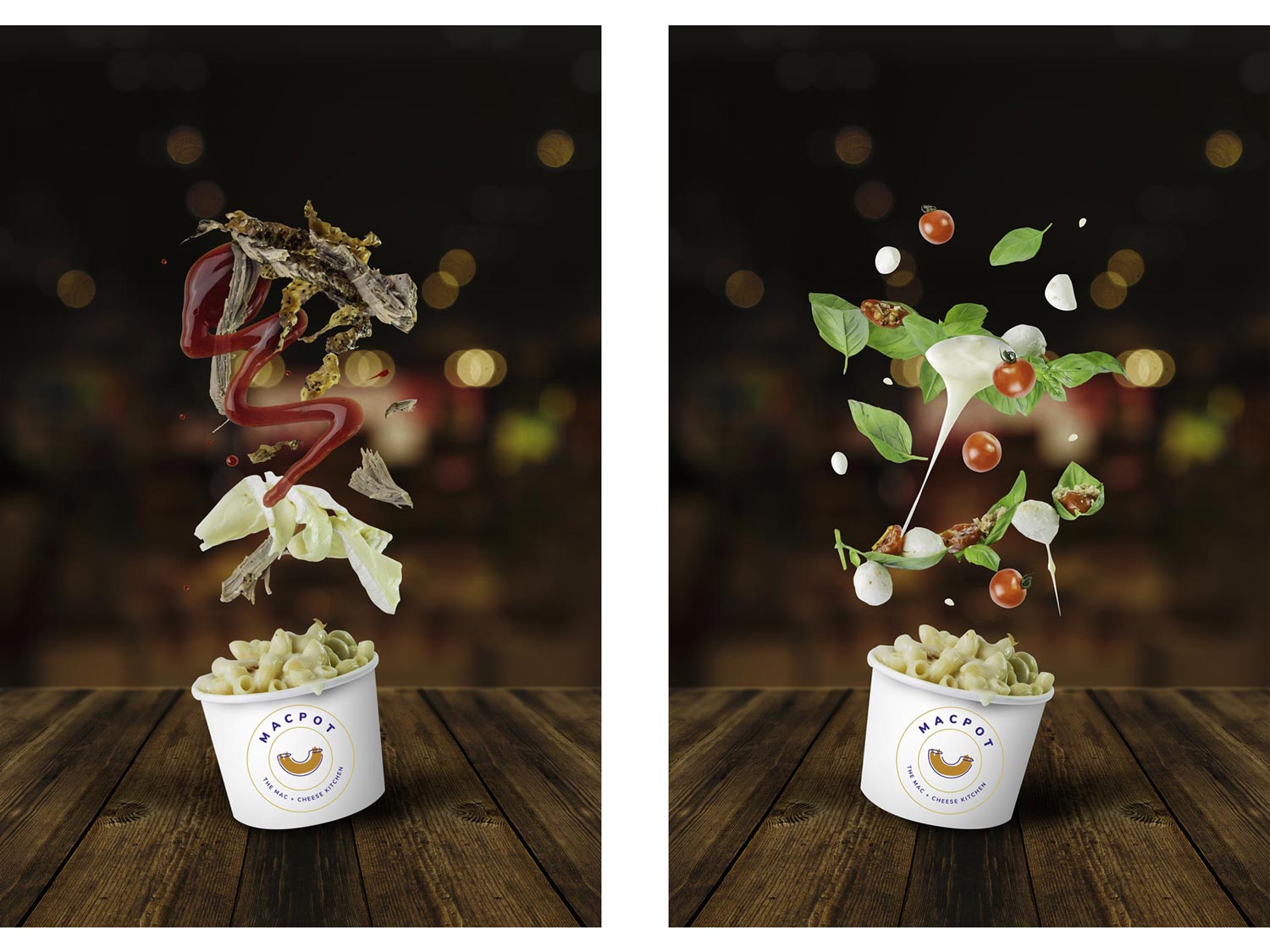 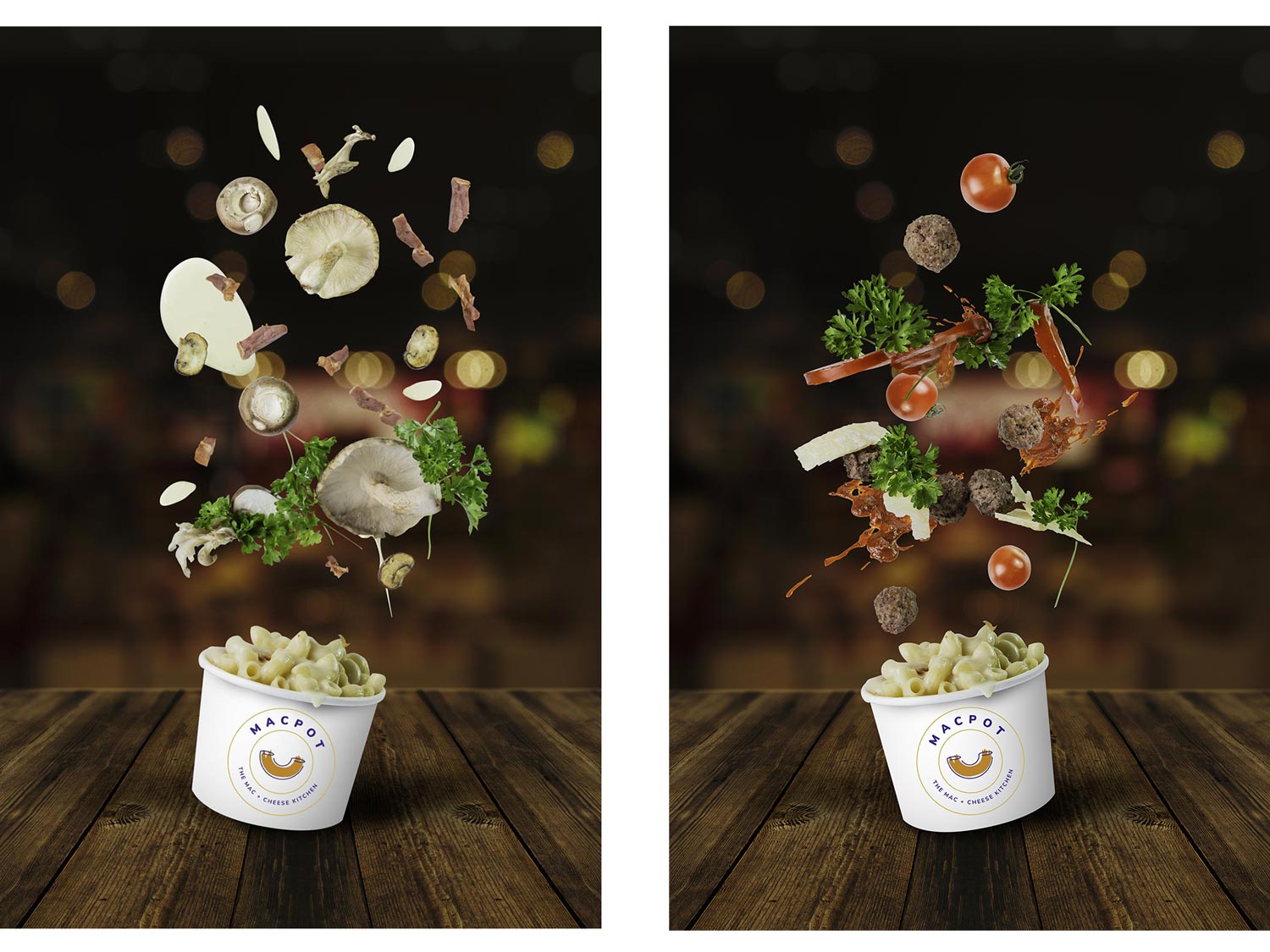 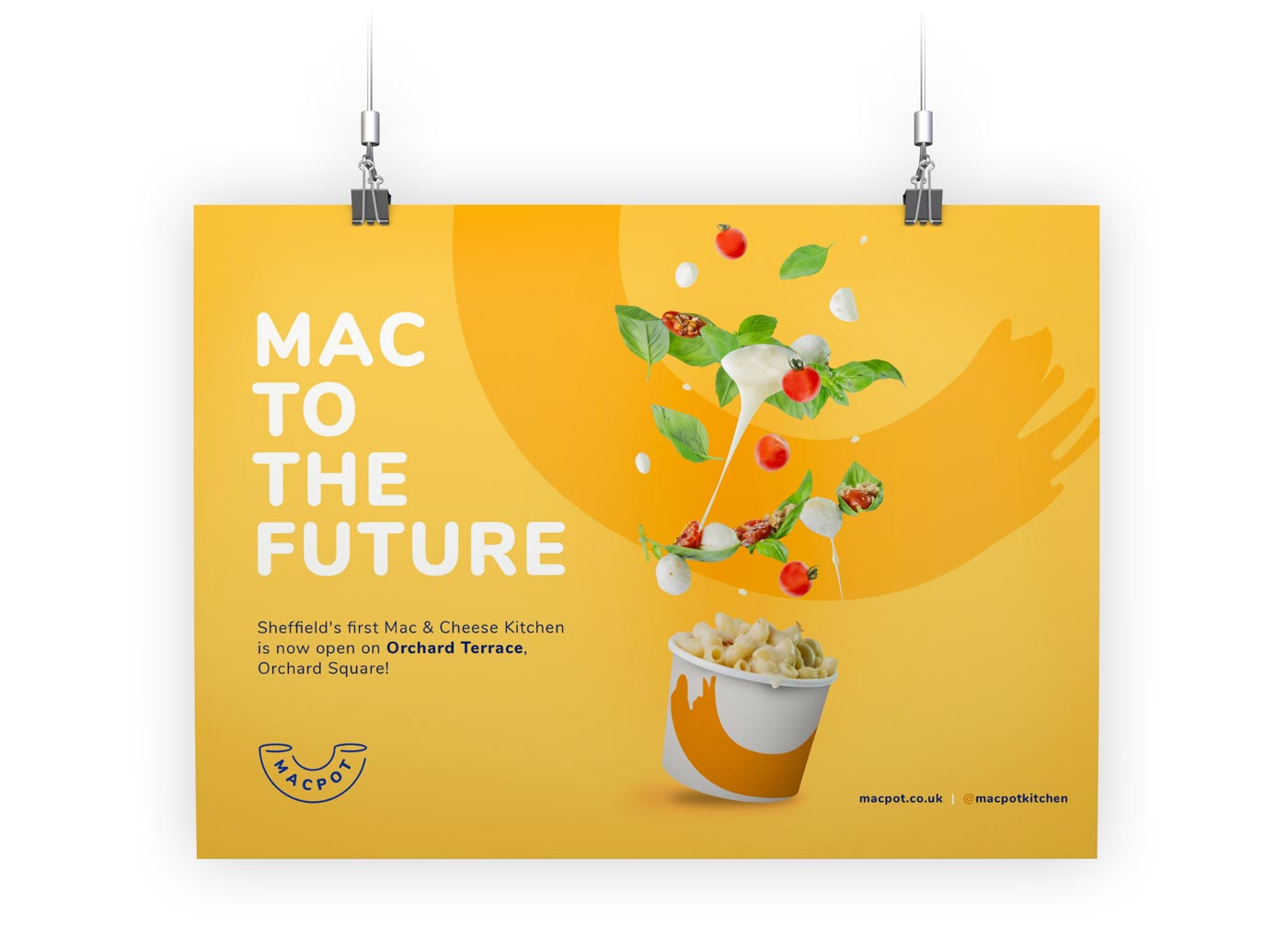 Macpot expect their customers to shout about their great new dining experience and believed in having an effective loyalty scheme to rewards those that did and to encourage more visits to eatery time and time again.

We created a series of loyalty campaigns that identified their target markets from the high street shopper to the local businesses working within the city. Through our custom digital loyalty and rewards app, we implemented a simple system for Macpot that meant that their customers could quickly acquire their loyalty points and redeem their rewards once they were available. 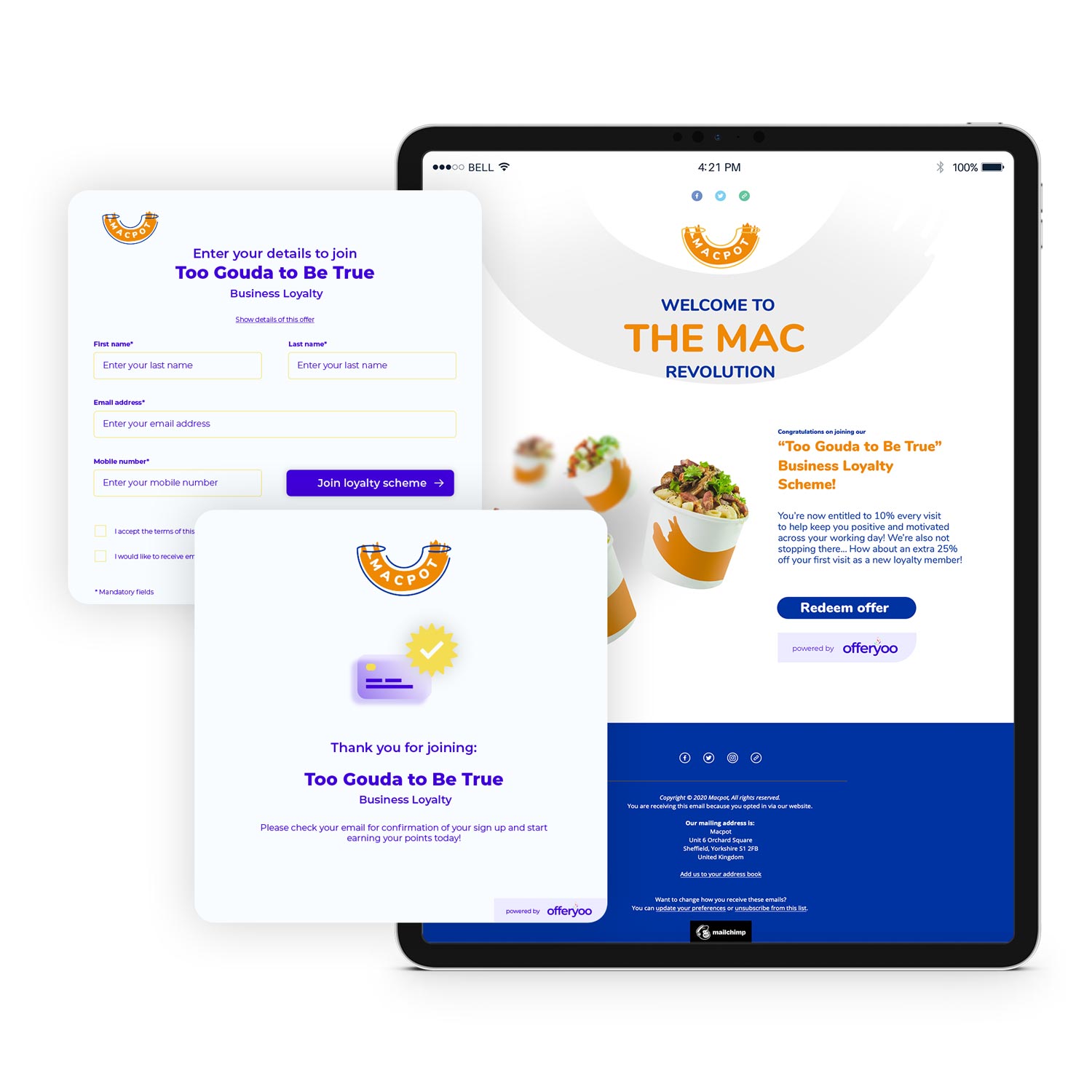 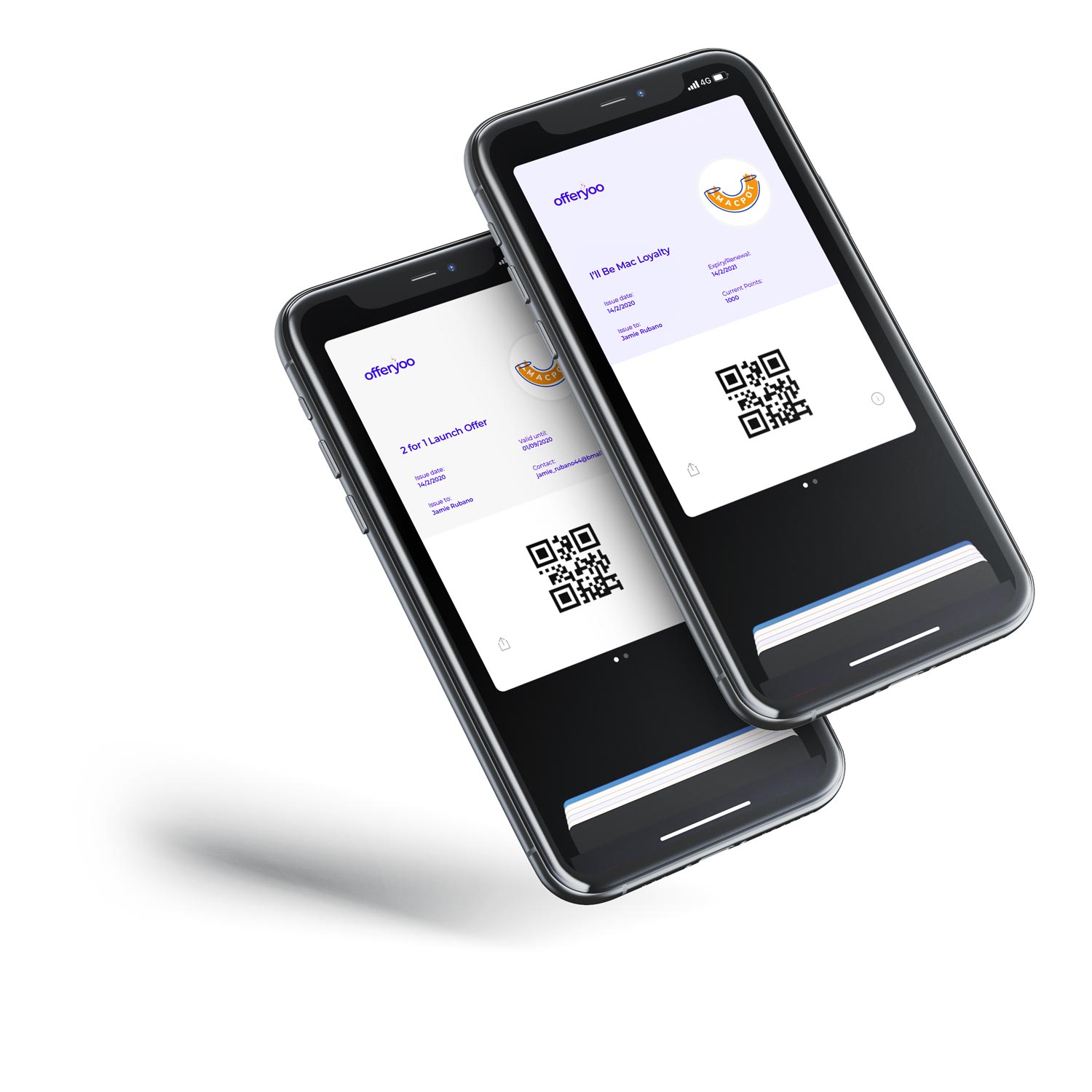 With all the pieces of the jigsaw ready to be put in place, we mapped out a launch plan to ensure that Mapcot’s grand opening was a success.

We developed a social and marketing comms plan alongside Macpot to ensure that their brand channels were growing interest in the run up to launch alongside the offer campaigns that we had produced.

A single page WordPress website was developed to include the fixed menu servings and tell the wider audience about what Macpot had in store for it’s customers. In addition to the one-pager, we built a series of purposeful landing pages to target potential demographics and encourage them to sign up to the loyalty and rewards scheme and be granted a launch offering in return.

The last thing was injecting the brand into the eatery, with signage and interior design assistance to ensure that their space was recognisable to their identity. 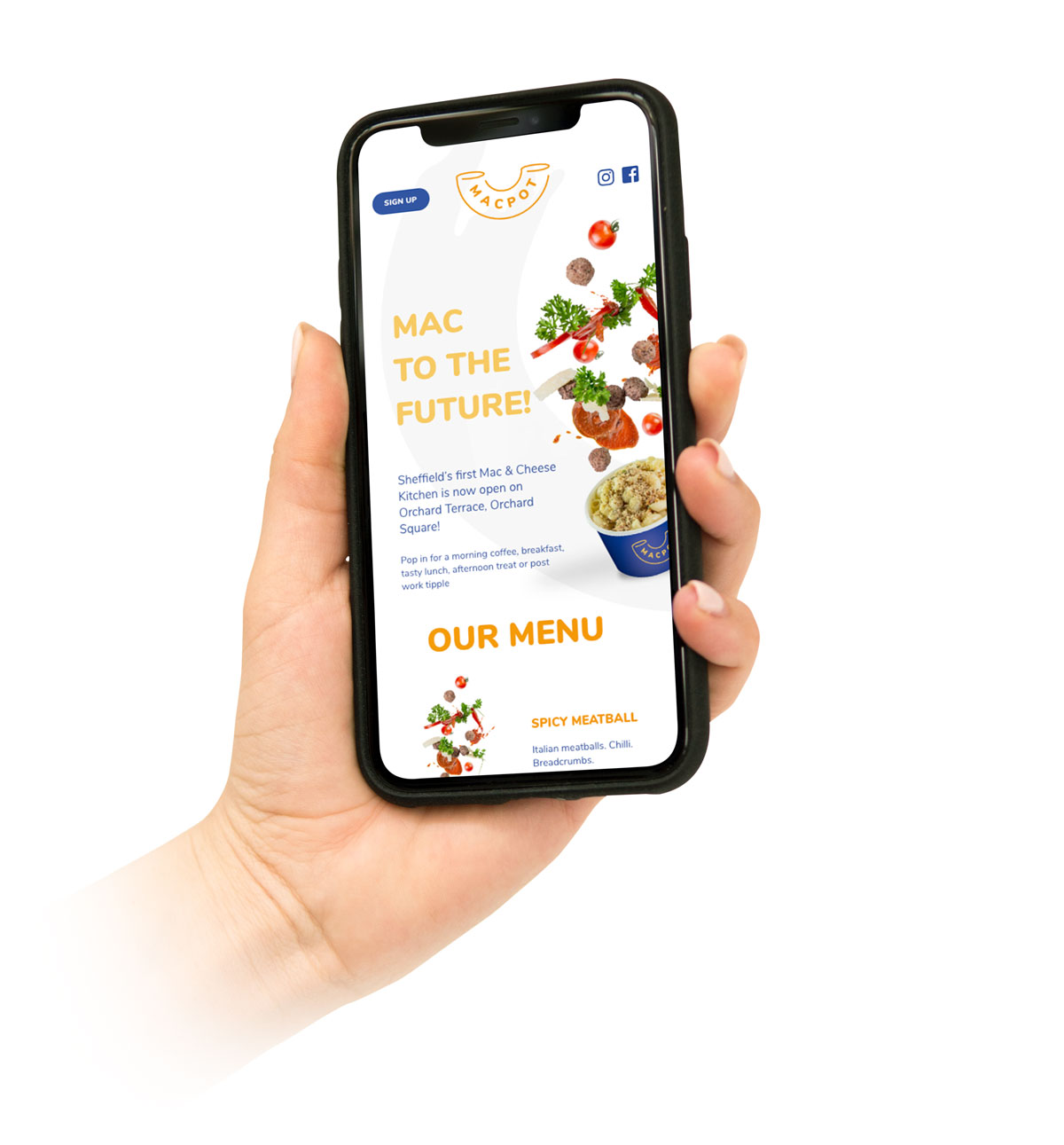 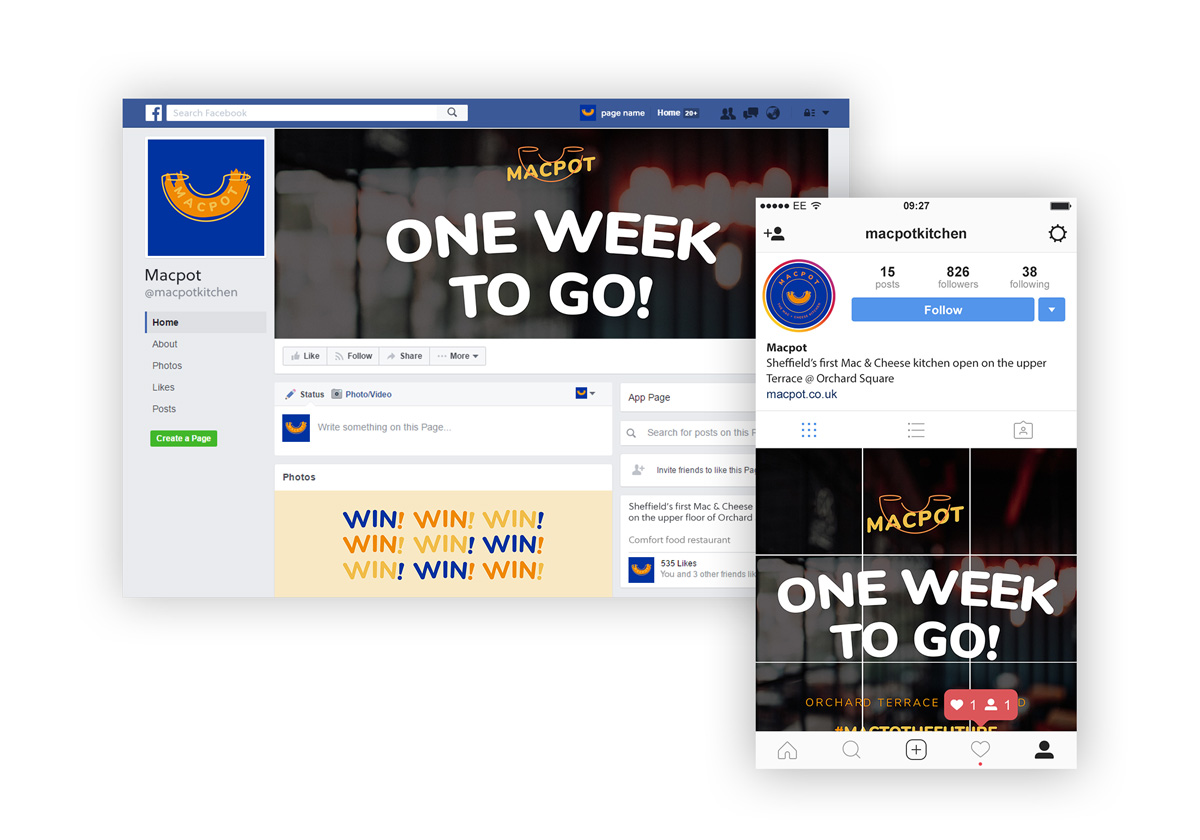 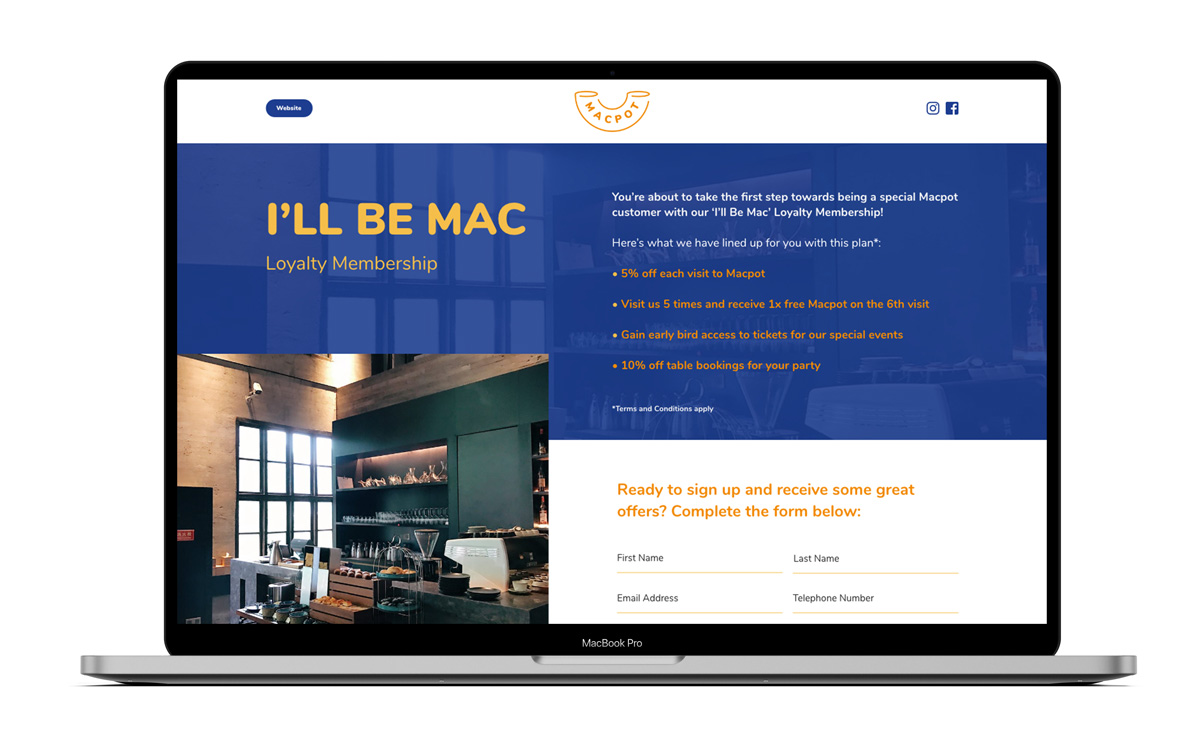 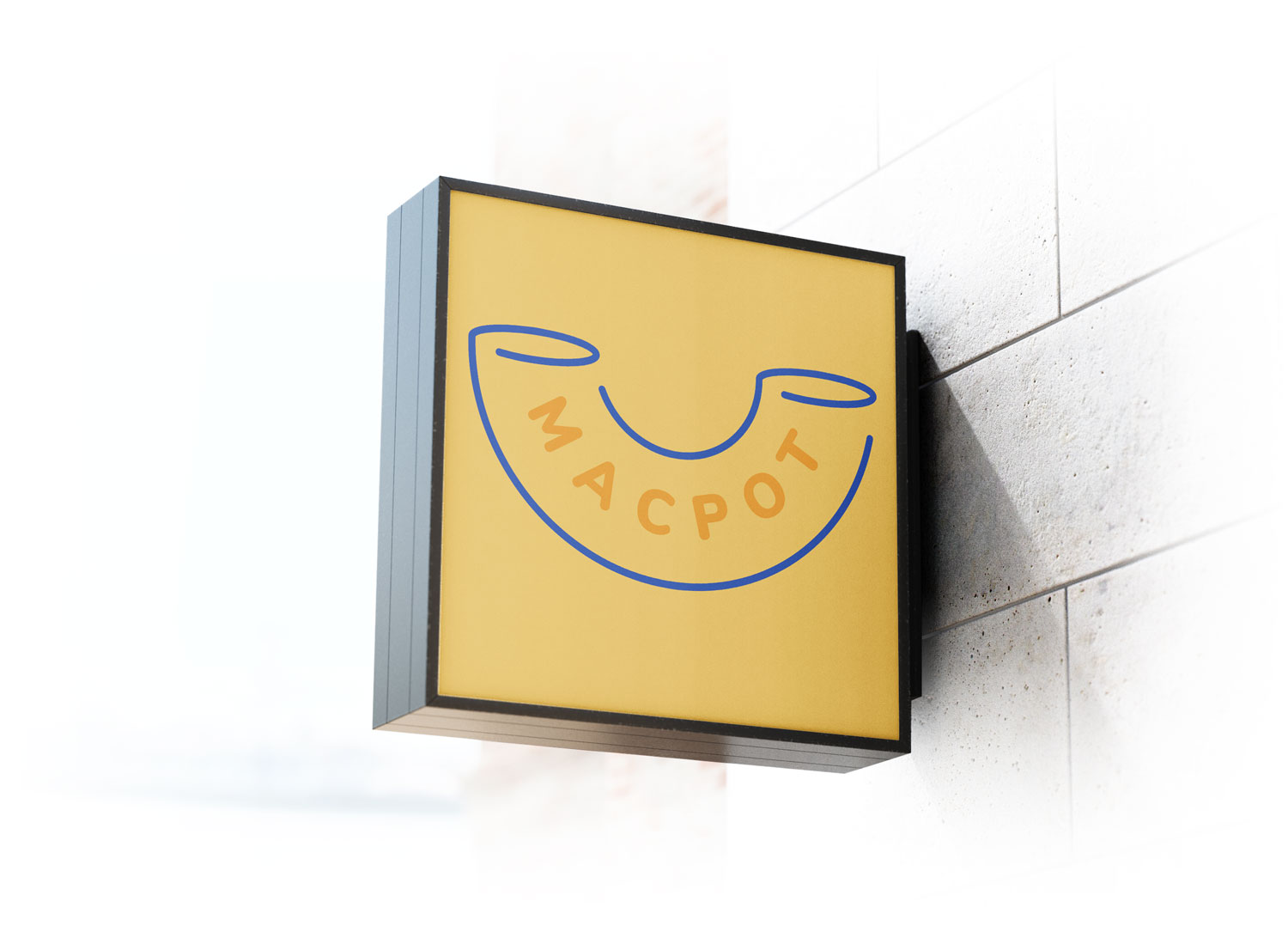